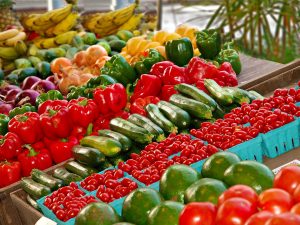 Fruits and vegetables provide essential nutrients for a healthy diet, and some of these also contain phytoestrogens (plant-derived estrogens). Exposure from naturally occurring phytoestrogens in food is sometimes compared to our exposure to synthetic EDCs, but CHEM Trust thinks these issues should not be conflated. It is well known that also carcinogenic substances occur naturally in food (e.g. formaldehyde in apples) and yet no one would seriously dispute the need for regulation of carcinogens in consumer products and production processes.

Natural exposure to phytoestrogens does not mean that synthetic EDCs are safe, and neither should it be assumed that high consumption of natural phytoestrogens is good. Exposure to natural EDCs can certainly have negative impacts. Studies in mice with the phytoestrogen genistein have found several effects of potential concern, including early onset of puberty in females and alterations in the development of breast tissue, as well as potential developmental and future reproductive problems [i]. And reported effects of phytoestrogens on sheep and cattle include reproductive problems and infertility (e.g. sheep eating too much clover [ii]).

Regarding humans it is interesting to note that the official medical advice in many countries, including the UK and Germany, [iii],[iv] recommends parents not to give babies soya-based infant formula, unless a doctor specifically advises this for medical reasons.

It is very well recognized that infants go through developmental stages that are sensitive to estrogens. According to the US National Institute of Environmental Health Sciences (NIEHS), infants are therefore more likely than adults to be vulnerable to the estrogen-like effects of the phytestrogens such as isoflavones (e.g. genistein) in soy [v]. The safety of long-term use of soy isoflavones has not been established; the evidence on potential benefits and risks is still inconclusive due to confounding factors, according to the US National Institute of Health (NIH) [vi].

Last but not least, people should simply not be unwillingly or unwittingly exposed to man-made hormone disrupters. There are benefits from eating vegetables and a pregnant woman may very well choose to eat a balanced and varied diet and avoid large amounts of soy products, but she cannot choose to avoid EDCs from pesticide residues in food or water. Synthetic chemicals with the unwanted side effect of endocrine disruption are not part of a healthy diet.

The next question is “If EDCs are so dangerous then why haven’t they been banned? Surely all chemicals in products have been tested to show they are safe?“.