Today CHEM Trust publishes a detailed report on ‘Chemical Recycling’, a set of technologies that are often claimed to be on the cusp of revolutionising the recycling of plastics. This study finds that these technologies in reality have major problems, including substantial energy use, a need for pre-sorted, good quality plastic input and concerns over hazardous chemicals.

The report, “Chemical Recycling: State of Play“, written by the environmental consultancy Eunomia, reviews available information on a large number of different chemical recycling technologies, and attempts to assess their performance and feasibility, including their energy use, climate impacts, to what extent they are able to address hazardous chemicals and how they might fit into waste management systems.

Many of the technologies are not able to deal fully with hazardous chemicals in the plastic feedstock, generate waste that may contain hazardous chemicals, and it is often hard to establish to what extent hazardous substances are used within (or generated by) the chemical recycling processes.

What is chemical recycling?

Chemical recycling aims to recycle plastics by changing their material structure. There are three broad categories of chemical recycling, which are suitable for different types of plastics. In brief:

How the report assesses the performance of chemical recycling

The important factors when assessing the performance of chemical recycling, which are covered in-depth in the full report, include:

The full report uses Eunomia’s information on a very large number of different technologies to assess these factors; the full list of technologies is listed in Annex A.

The table at the bottom of this blog page summarises some key outcomes of the Eunomia analysis; the table can also be downloaded as part of the Executive Summary (though this should be read in association with the full report).

Does chemical recycling address hazardous chemicals in the circular economy?

The EU chemical industry trade association CEFIC has claimed that chemical recycling has the potential “to capture and separate the so-called legacy chemicals and substances of very high concern (SVHC) that can be present in end-of-life plastic”. The Eunomia study finds that the situation is rather more complex than this.

Importantly, the report finds that there is a lack of information concerning:

Bearing this general lack of information in mind, the report identifies specific issues with the three types of technology:

A need for transparency

The key conclusion that Eunomia draws in the report is the need for greater transparency on the performance of these technologies, here is an extract:

“Throughout this report the overriding finding is that there is a general lack of transparency or robust evidence base that can be used to verify claims or generate firm conclusions around the viability of many technologies….This also means that caution must be exercised as a lack of evidence can mean either a knowledge gap or that the answer is less favourable.

In the interests of confirming the role, scale and scope of these technologies, there is an urgent need for more transparency within the chemical recycling industry. There is evidence to indicate that at least some technologies have promise, but important details around mass flows, chemical use and the viability of the processes in real-life waste management circumstances are largely incomplete. Investment should be reserved for those organisations that freely engage to improve the understanding around these missing elements.” [our emphasis]

“CHEM Trust commissioned this report to try to find the truth behind the hype about chemical recycling.

In the context of a clean and safe circular economy, as advocated by CHEM Trust, it appears that chemical recycling is being oversold. Decontamination of the recycling stream with these technologies requires extensive sorting and pre-treatment, and high energy input. The end result may still be contaminated with hazardous chemicals, and the economic viability of many of these technologies is in doubt.

CHEM Trust is also concerned about a lack of available information regarding the use, generation and fate of hazardous substances in these processes.

CHEM Trust’s view remains that the best way to achieve clean circular economy is to phase out the use of the most hazardous substances and ensure that they are not recirculated in secondary materials.

For more information, see the full “Chemical Recycling: State of Play” report; you can also download the Executive Summary (though this should be read in association with the full report). 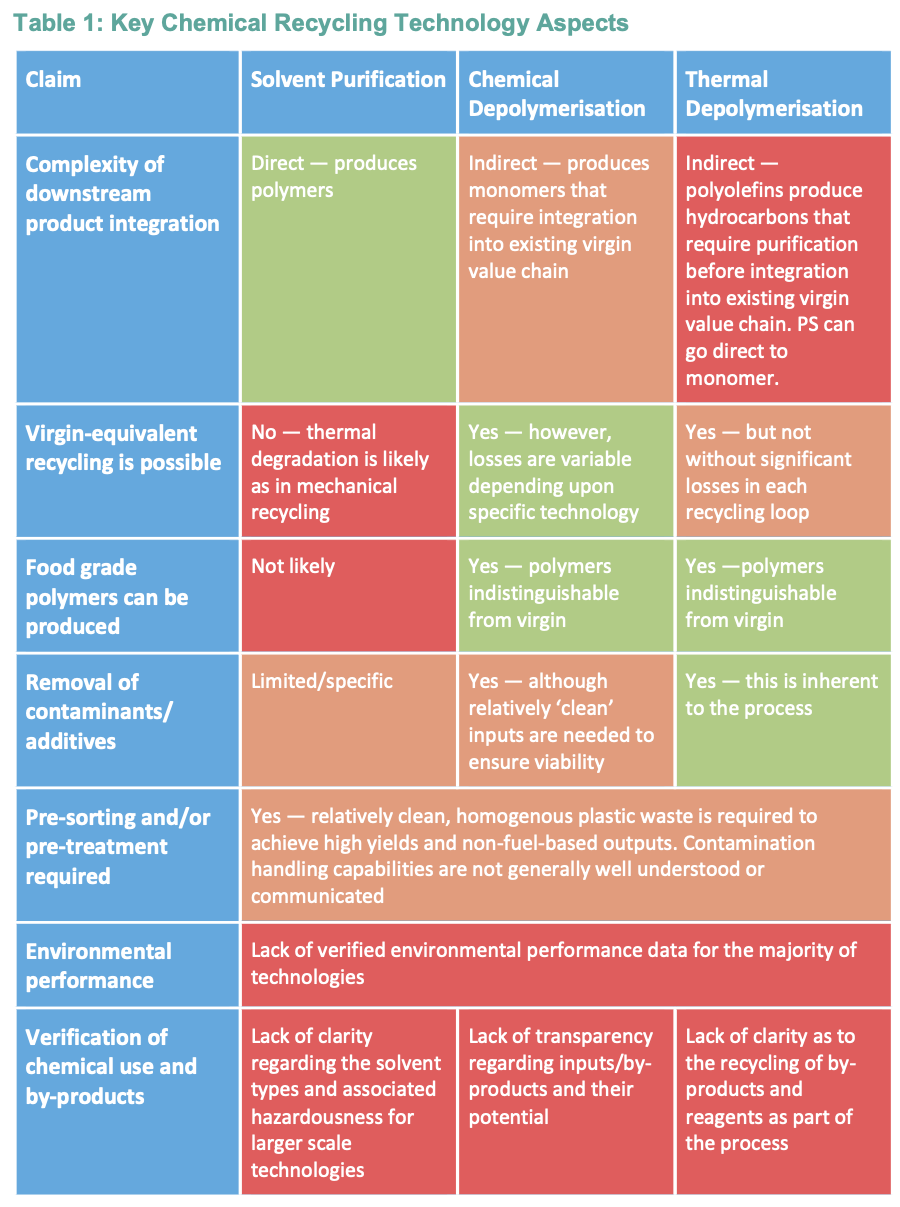