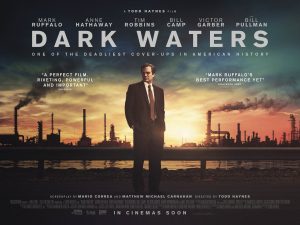 The Hollywood film ‘Dark Waters’ tells the real-life story of Rob Bilott, the lawyer who took on chemical giant DuPont after discovering that the company was polluting drinking water with the harmful chemical PFOA (also referred to as C8 in the film).

Starring actor Mark Ruffalo and directed by Todd Haynes, the film depicts Bilott’s discovery and his more than 15 year-long fight to secure compensation for the thousands of people affected.

PFOA is a member of a family of over 4,500 chemicals called PFAS, also known as the Forever Chemicals. Though the film portrays PFAS pollution in the US, it is also a serious issue across Europe and the UK.

PFAS – per and polyfluorinated alkyl substances – are used in a wide range of consumer products, including non-stick pans, cosmetics, waterproof clothing, grease-proof paper and cardboard food packaging. Several PFAS have been linked to a number of health concerns, including kidney cancer, testicular cancer, reduced response to vaccines, and thyroid disease.

To learn more about PFAS, see our briefing and our PFAS Webpage or visit Fidra’s website, PFASfree.org.

‘Dark Waters’ raises a number of questions about PFOA and what actions we can take to reduce our exposure to the whole family of PFAS chemicals; here are some frequently asked questions:

PFOA stands for Perfluorooctanoic Acid. It is one chemical that belongs to the large family of over 4,500 fluorinated substances known as PFAS (Per- and polyfluoroalkyl substances). PFAS are extremely stable and can repel both grease and water making them extremely useful in a wide variety of products.

PFOA was widely used in the production of a number of products, including non-stick kitchenware, textiles (such as water-resistant clothing), paper, paints, and fire-fighting foams. But in the past couple of decades, the industry has moved away from the use of PFOA due to increasing concern over the scale and impact of PFOA contamination. However, PFOA was simply replaced by other chemicals from the large PFAS family. These ‘new’ PFAS had been initially less scrutinised and were presented as ‘safer’ by the industry. But now they have been found to be similarly problematic.

In 2019, 50 years after DuPont discovered high PFOA concentrations in the blood of its factory workers in the US and 20 years after Rob Bilott filed his first federal suit against DuPont, PFOA was banned globally under the Stockholm Convention. It is one of only two PFAS chemicals (the other being PFOS, which was banned in 2009) that have been regulated globally.

At the current rate of regulation, it would take over 40,000 years to regulate all of the PFAS chemicals one by one.

Why should I be concerned about PFOA and other chemicals in the PFAS family?

PFAS chemicals are synthetic chemicals which don’t exist in nature. Before their manufacture started in late 1940s, no PFAS were present in the environment. Now they contaminate every corner of the globe and have been found in the blood of people and wildlife worldwide.

PFOA, along with other chemicals in the PFAS family, are bioaccumulative. This means they can build up in the human body because they are absorbed but not excreted.

Exposure to PFOA has been linked to six major health issues: kidney cancer, testicular cancer, thyroid disease, high cholesterol, ulcerative colitis, and pregnancy-induced hypertension. These links were found by the US C8 Science Panel, which is referenced in the film  ‘Dark Waters’. Chemicals from the PFAS family have been linked to other health issues, including reduced response to vaccines and lower birth weights. In the EU, PFOA was classified as toxic to reproduction in 2017 and the restriction for PFOA and related substances entered into force in July 2020.

PFOA and other PFAS chemicals are extremely persistent in the environment, thanks to a special carbon-fluorine bond. This specific carbon-fluorine bond is one of the strongest bonds in nature. As a result of this bond, PFAS chemicals do not break down easily and will persist in the environment for decades. This has earned PFAS the nickname the forever chemicals. This persistence is concerning because it means that current pollution from PFOA and other PFAS chemicals could build up and impact generations that are not even born yet.

PFAS chemicals are also extremely mobile. They can pass easily through normal drinking water treatment facilities to contaminate drinking water and can build up in the edible parts of fruits and vegetables. Their mobility means that they have been found in every corner of the globe, including the Arctic and Antarctic.

Though the impact of exposure to PFAS on wildlife is less studied, some PFAS have also been linked to negative impacts on the reproductive, hormonal and immunological systems in wildlife.

Why is PFOA present in the blood of 99% of people?

In the outro of the film it is written that PFOA is believed to be in the blood of 99% of humans. This figure comes from the US, however studies in the UK and around the world also show that almost everyone has chemicals from the PFAS family in their body.

PFOA and other PFAS chemicals are present in our bodies because we are exposed to them daily through consumer products that contain PFAS (e.g. food packaging, non-stick cookware, cosmetics, furniture) and via environmental exposure (including from drinking water, indoor air, and certain foods). Some PFAS chemicals, including PFOA, are bioaccumulative. This means they can build up in the human body over time because they are absorbed but not excreted.

Is PFOA pollution an issue in the UK?

PFOA and other PFAS are not manufactured in the UK, so the level of contamination shown in the film ‘Dark Waters’ has never been found in the UK.

However, PFAS pollution is an issue in the UK. The main source of PFAS pollution in the UK is from everyday products that contain PFAS (e.g. cosmetics, food packaging, textiles). Emissions from these products are widespread and difficult to control. Other sources include manufacturing industries using PFAS (such as the paper and textile industries) and historical contamination from the use of fire-fighting foams containing PFAS.

PFOA and other PFAS have been found in many UK rivers (including the River Thames), drinking water, fish and indoor air.

A 2020 report from Scottish NGO Fidra found that PFAS chemicals are present in a range of food packaging found in UK supermarkets and takeaways, including bakery bags, pizza boxes, microwave popcorn bags and compostable takeaway boxes. A 2021 study from CHEM Trust and partners has found that PFAS are still being used in food packaging from high street UK retailers.

Are there other chemicals like PFOA I should be worried about?

In addition to PFOA, there are over 4,500 other chemicals in the PFAS family. The vast majority of these chemicals have not been studied, but the PFAS that have been studied have been found to be problematic.

One major problem is that when one PFAS chemical is regulated, it is replaced in products and manufacturing processes by a similar, unregulated PFAS chemical. Unfortunately, the chemicals’ similarities often extend to their hazardous properties, and the replacement chemical is found to have similar harmful impacts on human health and the environment. This is known as regrettable substitution.

At the current rate of regulation, it would take over 40,000 years to regulate all of the PFAS chemicals. CHEM Trust is therefore advocating for the PFAS family to be regulated as a group to accelerate the regulatory process.

PFAS chemicals are not the only problematic chemicals we come in contact with in our daily lives. Please visit our website for more information.

Should I ditch my Teflon pan?

Teflon pans are made of a type of PFAS called PTFE. PTFE is a type of polymer PFAS, and PTFE in itself is not thought to be harmful to humans. However, there are concerns that if your non-stick pans become overheated or chipped during cooking, these polymers can break down into more harmful PFAS.

Harmful PFAS are also used in the production of PTFE and can leak into the environment at this stage. PFOA was used during this process and has now been replaced by other harmful PFAS chemicals.

What can I do to reduce my exposure?