We are all exposed to endocrine disrupting chemicals (EDCs) from everyday sources, including food contact materials, cosmetics and toys, and these are linked to a range of health concerns.  In 2017 the EU Commission announced that it would develop a new strategy to minimise exposures of EU citizens to endocrine disrupters beyond pesticides and biocides. 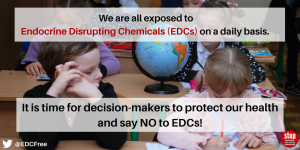 In November 2018 the European Commission announced a regulatory fitness check of EU laws relating to EDCs, which CHEM Trust said fell far short of what is needed to urgently reduce human and wildlife exposure to EDCs.

Our concerns were echoed in the recent Environment Council debate on 5th of March, where several countries called for more decisive regulatory action to reduce and minimise exposure to endocrine disrupters.

This month, two new reports illustrate scientists’ concerns about EDCs and the way future European laws need to be improved and implemented.

This week the EU Parliament`s Petition committee published the report  ‘Endocrine Disruptors: from Scientific Evidence to Human Health Protection`. The report reviews the scientific evidence of EDC exposure and associated health effects and costs. It also gives an overview of relevant EU regulations and makes recommendations for the better protection of human health.

In CHEM Trust’s opinion the following three recommendations from the report should be taken forward as priorities in the upcoming EDC-Fitness check:

The European Endocrine Society welcomed the report and the International Endocrine Society supported many recommendations in their reaction. The NGO coalition EDCFree Europe, which CHEM Trust is a member of, has published a statement calling for more action on EDCs.

Another important report on EDC assessment was published by the Danish Centre on Endocrine Disrupters at the beginning of this month.

The report summarizes the results of two scientific workshops with international experts who discussed the uncertainties in the assessment of risk due to exposure to EDCs.  The main uncertainties identified included:

It highlights how different thresholds calculated for EDCs can differ by several orders of magnitude, depending on the approach used.

In CHEM Trust’s view this report serves as an important reminder that any attempt to set safe thresholds for EDCs runs into difficult assumptions and high uncertainties. Moreover,  deriving levels for individual substances only would ignore the reality of cumulative exposures to other substances with similar effects. EDCs, therefore, should always be treated as non-threshold chemicals under EU law and replaced whenever alternatives are available.

“These new reports provide a very important basis for the planned evaluation of EU rules relating to EDCs. Europe`s proclaimed aim of minimising exposures to EDCs could be achieved if the messages and recommendations in the reports are taken up.”