How to avoid endocrine disruptors

Food consumption is the most common way that we are exposed to harmful chemicals, including endocrine-disrupting chemicals (EDCs). This is because we can come into contact with EDCs through the food we eat, the packaging it’s sold in, and the ways we store and cook food.

But you can make your shopping, kitchen and meal times safer by choosing well. Here we look at how to reduce your risk of exposure to endocrine disruptors in food and food packaging, storage and cooking. 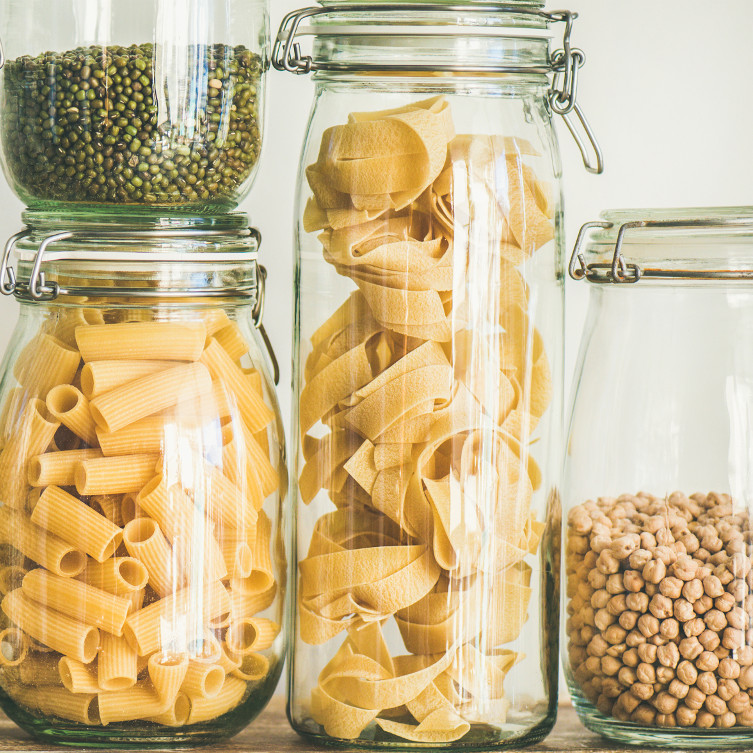 Many types of food can contain EDCs. This can be a result of the way they are produced – such as when farmers use chemical pesticides on apples. Or it can be a result of environmental conditions – for example, when fish ingest pollutants in the sea.

It would be difficult to avoid all sources of harmful chemicals in foods. But it’s a good idea to consider how much of the following you eat:

Reduce your risk of exposure to chemicals in food by choosing organic fruit and veg, lean meat, and fish with the lowest toxic chemical content. 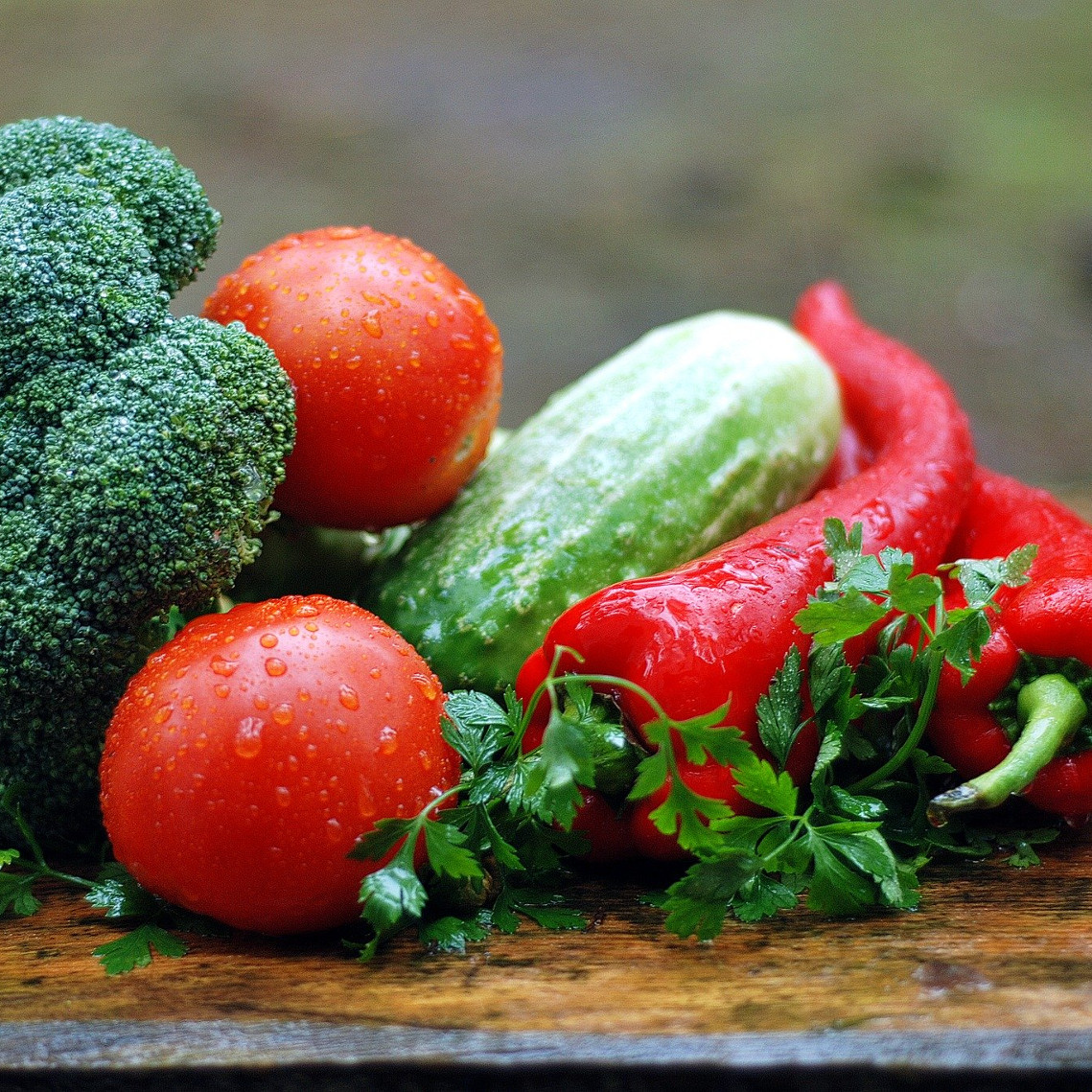 Eat lower down the food chain

Bioaccumulation of harmful chemicals in animals means that you may be exposed to toxic chemicals when you eat meat. Reducing or eliminating your consumption of meat can therefore reduce your exposure.

Harmful chemicals build up in fat cells, so if you do eat meat you may be able to reduce your exposure by choosing leaner cuts of meat or by cutting off excess fat.

EDCs can also be present in dairy products such as milk and cheese, as some of these chemicals build up in the milk of animals. Reducing your consumption of these products can reduce your exposure to harmful chemicals. 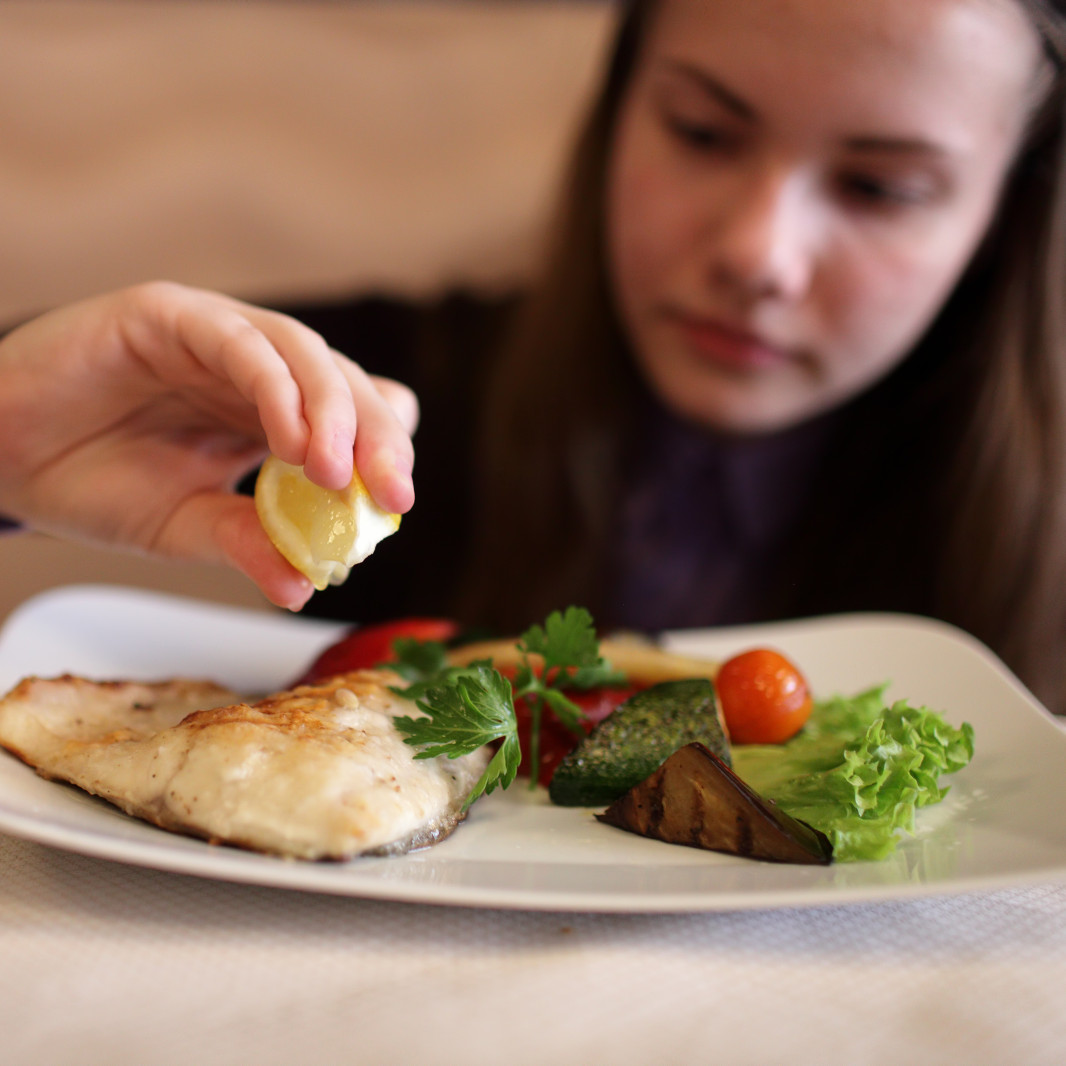 Fish, particularly oily fish, can help brain development. But oils in fish can also contain high levels of harmful chemicals that have built up and been stored in the fish tissues (bioaccumulated). Larger fish that are higher up the food chain eat other smaller fish. They are therefore more likely to contain harmful chemicals. So you can reduce your exposure by choosing fish lower down the food chain, such as sardines or anchovies.

Mercury contamination is common in fish in the form of methylmercury. It is particularly harmful. Exposure to mercury in children’s early development has been linked to impaired brain development and IQ.

Pregnant and nursing women and young children are advised to limit their intake of certain species of fish. These tend to be species that are long-lived and higher up the food chain – such as shark, swordfish, pike, tuna, hake, tilefish and king mackerel. If you’re buying tuna, for example, light tuna and line- and pole-caught fish are likely to have lower mercury content.

Where the fish is sourced from can also affect the level of harmful chemicals it contains, as some seas are known to be more polluted than others. For example, fish from the Atlantic Ocean has lower concentrations of persistent chemicals than fish from the Baltic, Mediterranean and North seas. 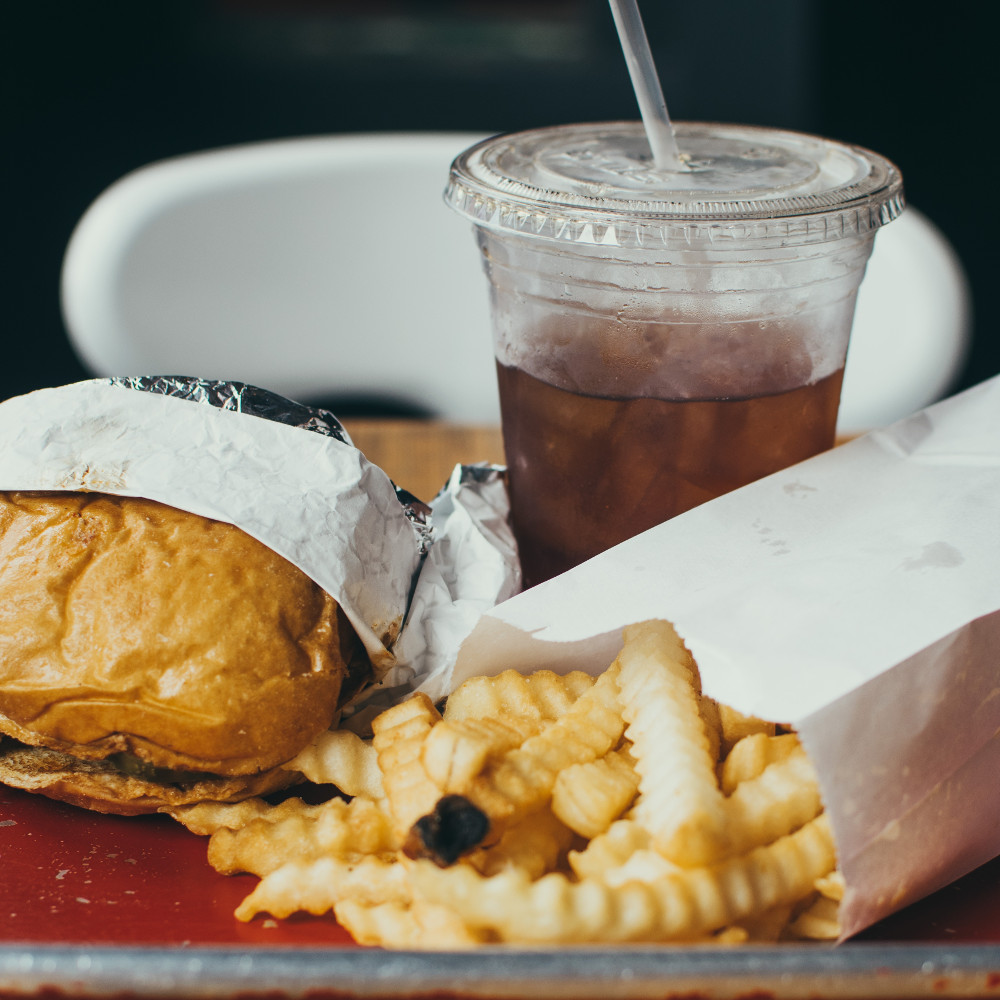 Fast food has been found to contain high levels of harmful chemicals such as phthalates. A US study found that the more take-aways people ate, the more phthalates there were in their bodies.

Fast-food packaging is also a source of exposure to harmful chemicals.

Processed foods may contain more harmful chemicals than fresh foods, as chemical additives are added during the production process. 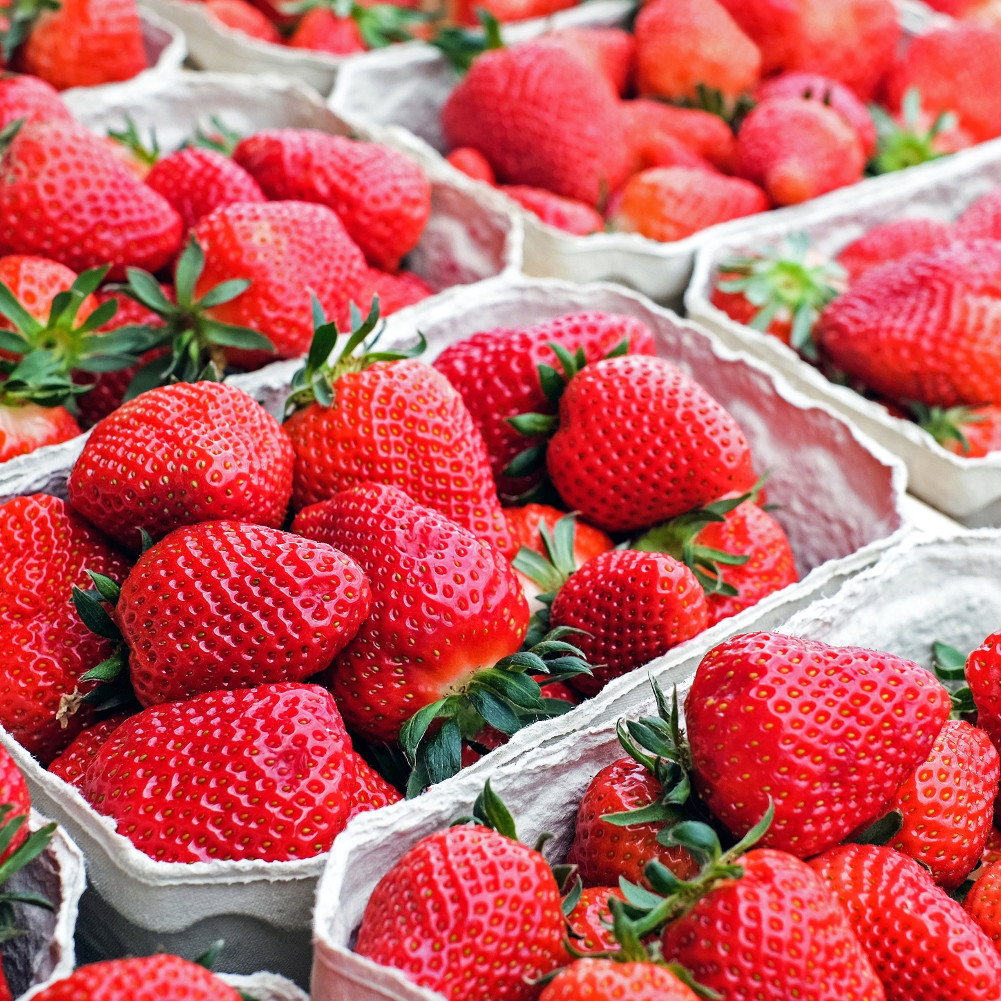 Farmers commonly use pesticides to protect crops and kill insects, weeds and fungi. Pesticide residues can stay on produce all the way to the fruit bowl or dinner plate. Some pesticides in use today are hormone disruptors or have been linked to certain cancers.

Washing fruit and vegetables in clean water can help remove residues from the surface of produce; and peeling will avoid chemicals embedded in the skin of fruits and vegetables. But some pesticides are absorbed throughout a plant, including the parts we eat – so washing and peeling are not always enough.

The best way to reduce your exposure to pesticides is to switch to organic food. If fruit, vegetables and cereals are labelled organic, it means the farmer won’t have used chemical pesticides – be they weed-, insect- or fungi-killers. 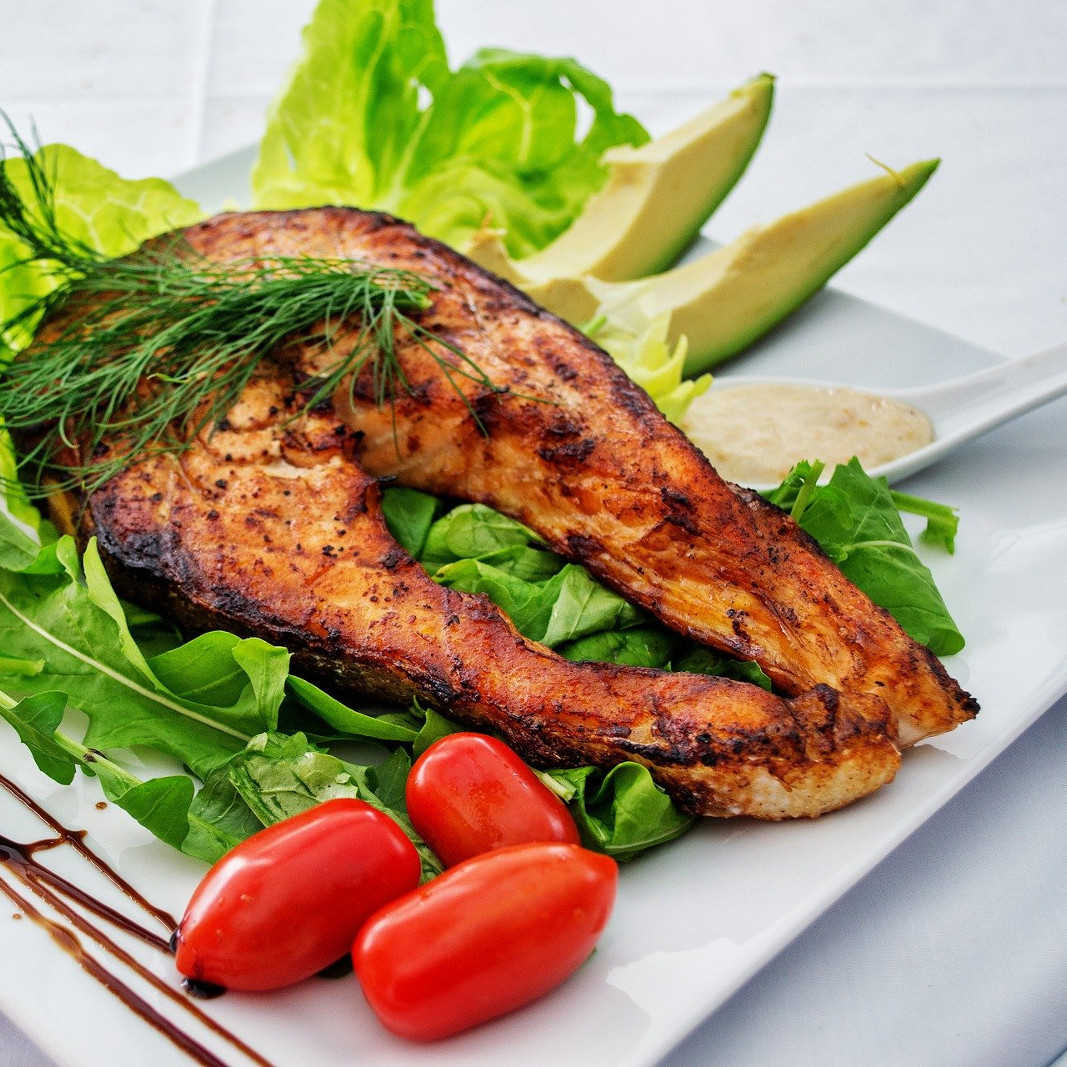 Farmers may also use pesticides on crops that they feed to their animals. The harmful chemicals in pesticides can build up in the fat cells of the animal and consumers can be exposed to these chemicals when they eat meat. Choosing organic meat can reduce your exposure to harmful chemicals. 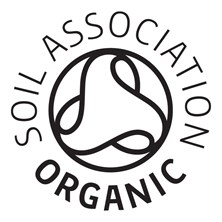 Choosing organic food is becoming easier in many places. If you’d like to choose organic, in the UK, look for the Soil Association and Organic Farmers and Growers logos on food labels; in the rest of Europe, look for the EU organic logo.

Some people worry that organic food costs more than non-organic – and that can be the case. If you are concerned about the cost of switching wholly to organic food, you could start by cutting out the most contaminated produce, such as meat, larger fish, and dairy products. Pesticides Action Network (PAN) has some handy guides to choosing foods, such as its “Dirty Dozen and Clean Fifteen” and 38 consumer tips. PAN Europe also lists fruit and vegetables that you’re most likely find pesticide residues on.

Consider putting pressure on your local supermarket to provide more organic produce. PAN Europe provides draft letters to help you do this. 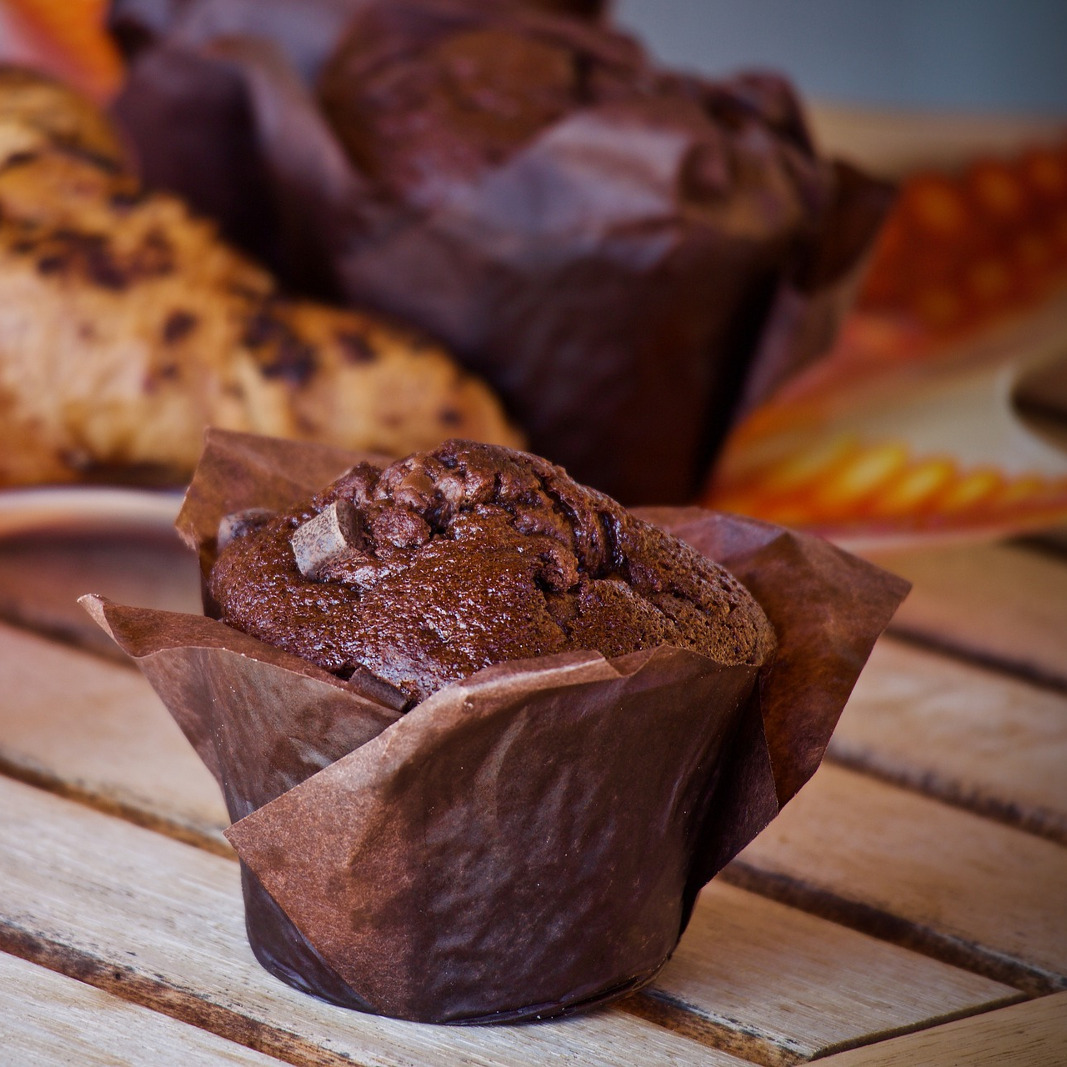 A lot of food packaging contains chemicals that are harmful to human health. Chemicals can leach from the packaging – also called food contact materials (FCM) – and contaminate food and drink.

Here we’re talking about things like plastic tubs, wrappers and bottles, but also cardboard containers and grease-proof linings. These types of packaging are not effectively regulated in the EU. They may therefore contain harmful chemicals.

Current legislation isn’t good enough to protect us. That’s why CHEM Trust is calling for stricter regulation of chemicals in food packaging.

Meanwhile, there are things you can do to reduce your exposure to harmful chemicals from food packaging.

Avoid or reduce your consumption of:

The best way to lower your exposure to harmful chemicals in food contact materials is to choose food that isn’t packaged. For example:

Which harmful chemicals are in food packaging?

It’s not easy to avoid packaged foods completely – but there are a few things to look out for and avoid.

A recent report from the organisation, Fidra, found that PFAS chemicals are present in a range of food packaging found in UK supermarkets and takeaways, including bakery bags, pizza boxes, microwave popcorn bags and compostable takeaway boxes.

The best way to avoid PFAS in food packaging is to avoid the use of disposable packaging where possible and opt for reusable containers instead.

Denmark introduced a ban on these chemicals in cardboard and paper food contact materials in July 2020 because of their impact on human health.

Some cooking equipment can expose us to harmful synthetic chemicals. Here are some ways to reduce your exposure. 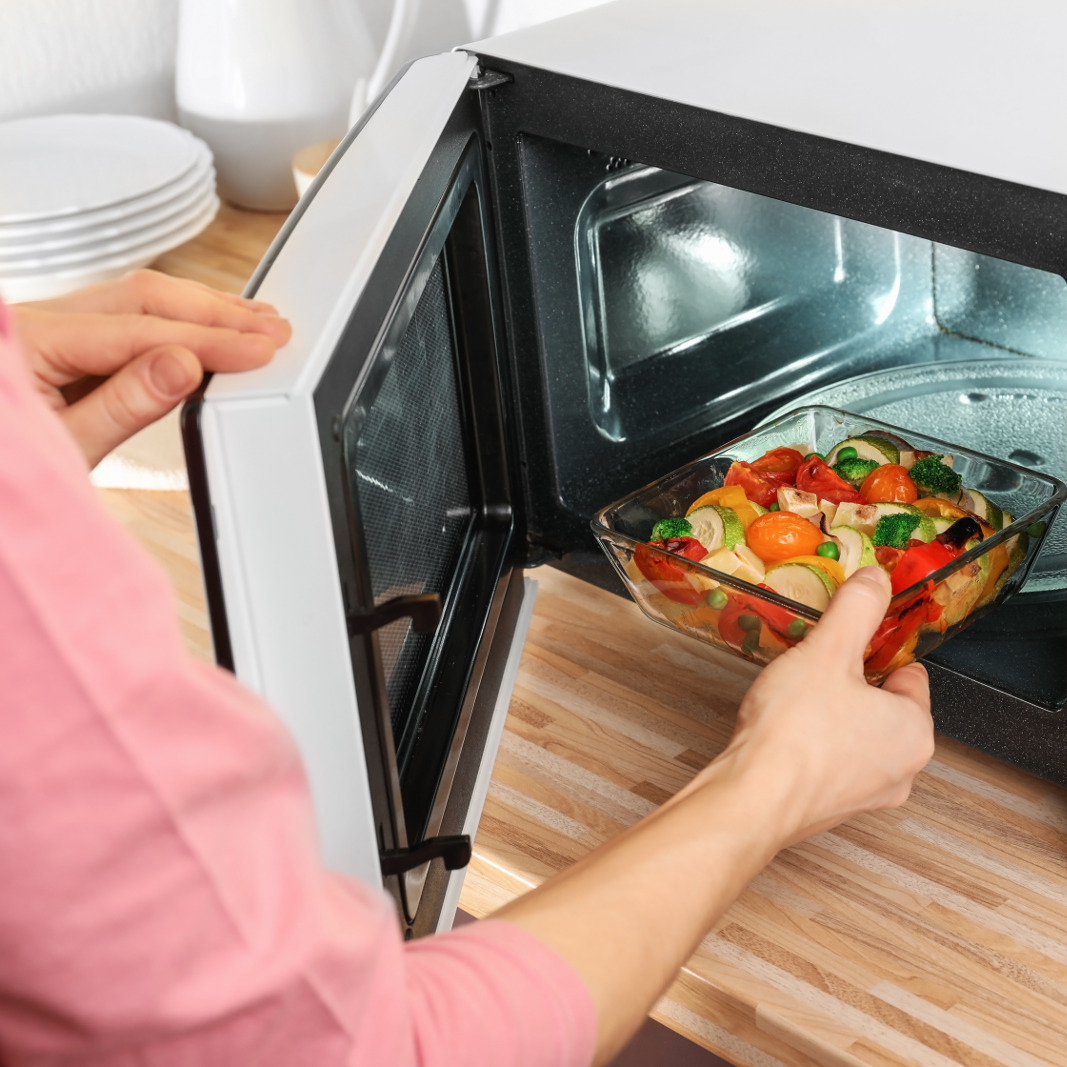 Many foods are sold with instructions to cook the contents in its packaging. Microwaveable rice is one example. But cooking in the bag may not be the safest option. This is because plastic containers can contain harmful chemicals such as bisphenol A (BPA), which can leach into food and drink – especially at higher temperatures in microwaves, for example. Just because something is labelled “microwave safe” doesn’t mean it’s free from harmful chemicals.

If you are buying food in plastic packaging, transfer it to heat-resistant glass or ceramic containers. Alternatively, skip the microwave and use a pan on a hob instead. 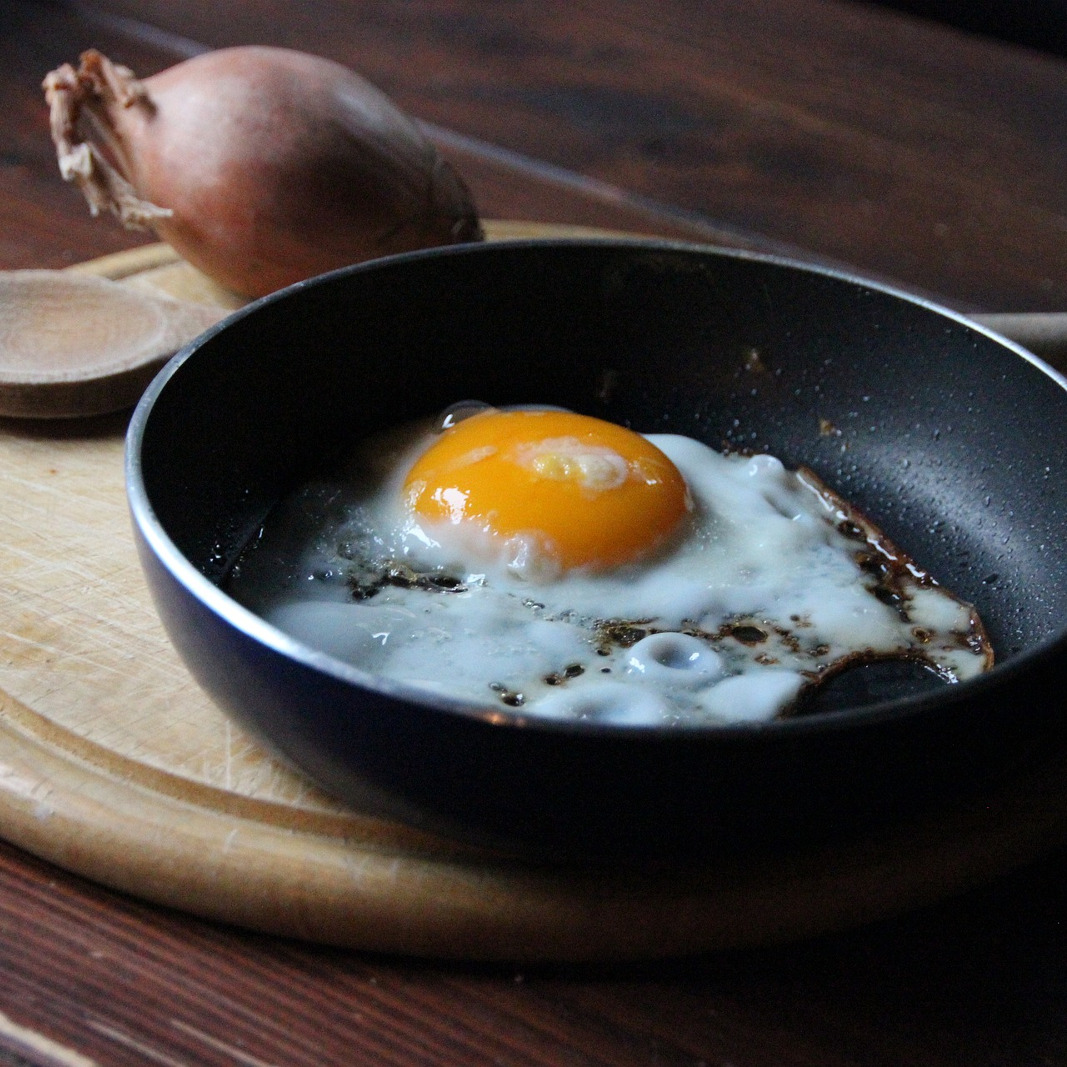 Many types of non-stick pans contain harmful PFAS. If the pans are overheated or chipped, harmful chemicals can leach from the coating into your food.

Choose stainless steel or ceramic pans. For cooking in the oven, ceramic or glass are good options. If you have to use non-stick pans, take care not to scratch or burn the surface. 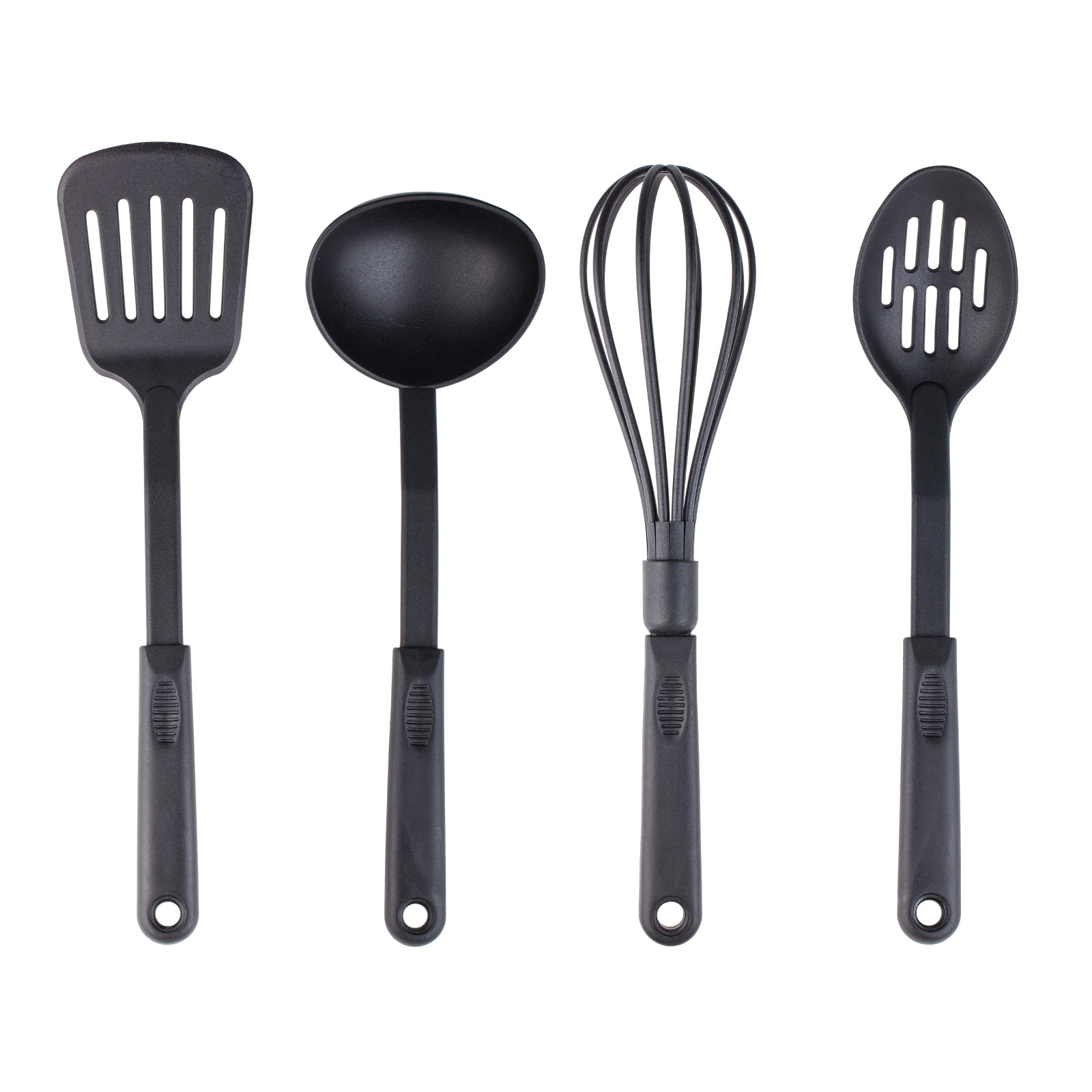 Hazardous chemicals, such as flame retardants used in black plastic electronic devices, are finding their way into black plastic cooking utensils. This is because these utensils may be made from recycled electronic waste plastic, according to a study by the University of Plymouth. 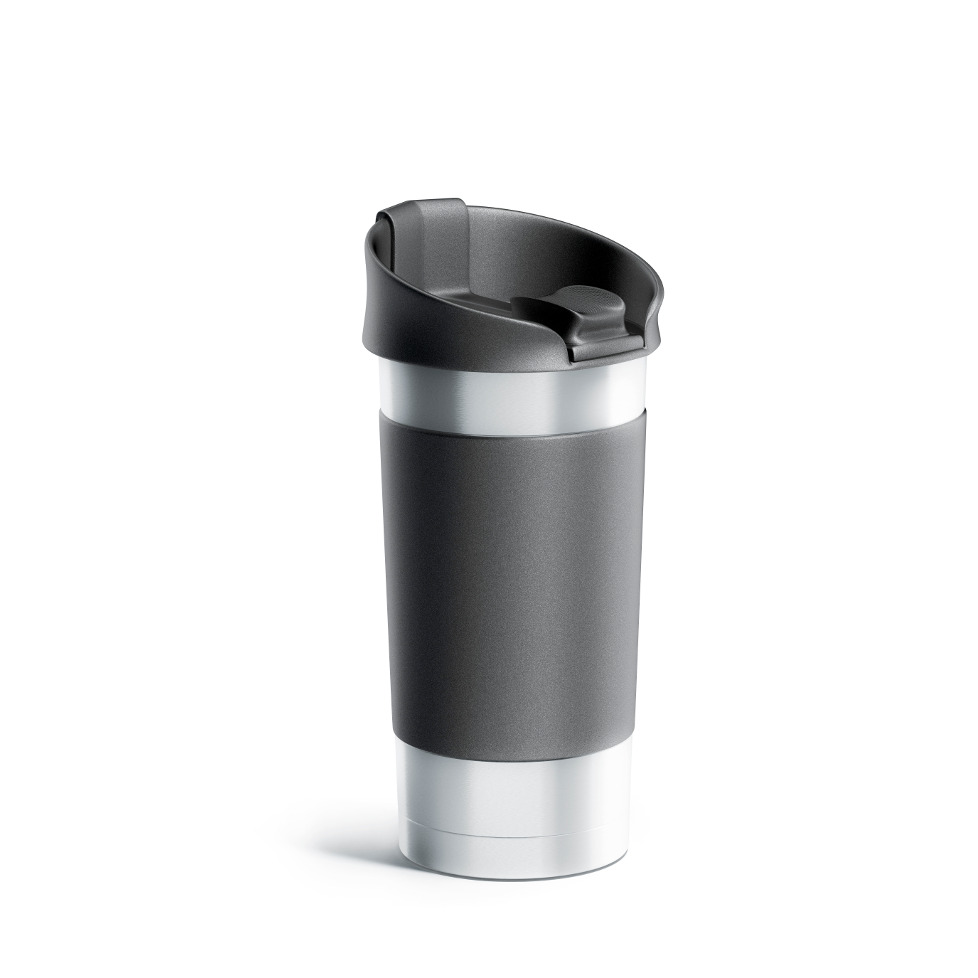 Reusable coffee cups are a popular way to reduce your use of single-use plastics. However studies have found that some reusable cups contain harmful chemicals. For example, some bamboo coffee cups were found to release melamine into the drink. Melamine is a chemical which may damage the kidneys. Some reusable cups may also contain harmful chemicals (pdf) if they are made of recycled plastics. Alternatives are stainless steel or glass cups, or sitting in a café and using a ceramic cup.

You can help CHEM Trust put pressure on UK supermarkets to remove harmful PFAS chemicals from our food packaging.