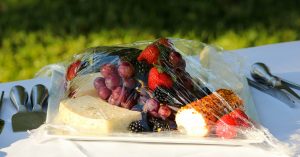 CHEM Trust reported in July that we are working with a collaboration of academic scientists and NGOs  to identify the hazardous chemicals associated with plastic packaging. We published a database of Chemicals associated with Plastic Packaging (CPPdb) which lists 4000 chemicals that are potentially present in plastic packaging, or used during its manufacture. At least 148 of these chemicals were identified as hazardous to human health and/or the environment.

The project has now identified which chemicals in plastic packaging, based on their potential impact on human health and the environment, should be a priority for the industry to find alternatives to. The process for identification of priority substances uses a set of agreed criteria and expert judgement; it’s worth noting that different prioritisation processes will have different outcomes.

The full methodology for the prioritisation can be found in the full report, but in brief:

All the chemicals identified following the steps above were phthalates.

Five phthalates were selected as the highest priority substances for human health in the context of this research project. These are:

More than 500,000 tonnes of PVC  is used in packaging across Europe each year. Its major packaging applications are rigid film (about 60%) and flexible film such as cling film (11%).

Phthalates are a well-investigated group of chemicals and a large number of studies have been published describing their toxicity, use and occurrence.

Due to their toxicity, national and transnational laws have been passed regulating the use of certain phthalates for specific applications. For example, in many countries the use of several phthalates in toys and other products for babies and children is banned.

In Europe, eight phthalates are subject to authorisation under REACH.The EU is currently finalising a restriction on the use of four phthalates DEHP, DBP, BBP and DIBP due to their toxic effect on reproductive health and the endocrine system. However, the proposed restriction does not prevent these chemicals being used in food contact materials.  DCHP has not yet been restricted in the EU, though it has been classed as a substance of very high concern for human health.

“In order to assess human health and environmental impacts of chemicals in plastic packaging, the chemical composition of these products needs to be known. There is an urgent need for more transparency on this matter, so protection can be achieved as efficiently and effectively as possible.

The European chemicals regulation REACH is a good example of how information on chemical uses and toxicity data can be shared, but several important areas for improvement exist. As the European Commission moves forward considering new regulation on food contact materials, lessons learnt from REACH should become an important information source.”

“This project is demonstrating how we need stronger, faster and more comprehensive regulation of problematic groups of chemicals such phthalates. We have known about the health impacts of phthalates for a very long time, which is why their use is restricted in some products such as toys, but oddly still allowed in food packaging. But we need EU regulators to phase out groups of chemicals of concern, rather than slowly restricting one chemical at a time.”

The full report can be found on the Food Packaging Forum’s website.

More about the research project can be found here.