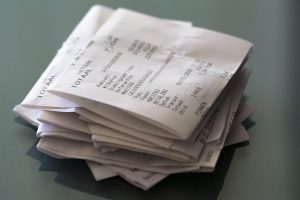 New research shows that thermal receipt paper – which you probably have sitting in your purse or wallet now – can contaminate your hands with hormone disrupting Bisphenol A (BPA), which can then be absorbed into your body.

The research, published today in the peer reviewed open access journal PLOS ONE  (full paper here), looked at what happened if men and women held receipts after using a hand sanitiser, and then ate french fries with their fingers. Within 90 minutes they found substantial amounts of BPA in the blood serum and urine of their experimental subjects.

Till receipts are such a routine part of daily life, yet this research shows that the BPA used in them can rapidly move through our skin & into our bloodstream. This chemical has been used for decades & it is shocking that the scale of this exposure has only just been identified. This pollution is particularly worrying, as research has linked BPA to a wide range of medical problems, from cancer to diabetes.

BPA was first found to mimic the female hormone oestrogen 76 years ago, in 1938. In addition to its use in thermal paper, it is also extensively used in food can linings and polycarbonate bottles. There has been an active debate on its endocrine (hormone) disrupting properties for around 20 years, with chemical producers arguing that it is harmless & increasing numbers of scientists warning of its ability to disrupt hormonal systems – for example see the presentations in from the recent food packaging conference.

The French government has recently proposed that the EU should ban the use of BPA in thermal paper – and CHEM Trust have submitted evidence to back this French proposal, for more on this see our blog post. This worrying new research considerably strengthens the case for rapid action to bring in this ban.

This research is also important for the huge number of businesses – notably retailers – that are using thermal paper. It’s also very relevant for the workers working within these businesses, many of whom will touch a lot of thermal paper during their working day.

This shows that it’s not enough for businesses just to cut their carbon footprint & become more resource efficient – they need to address chemical pollution too.

“The research is “very significant” and offers “substantial evidence why the French restriction proposal should be passed”, said Michael Warhurst of NGO CHEM Trust”

“This chemical has been used for decades, and it is shocking that the scale of this exposure has only just been identified,” says Michael Warhurst of campaign group Chem Trust.
“This research is also important for the huge number of businesses – notably retailers – that are using thermal paper. It’s also very relevant for the workers working within these businesses, many of whom will touch a lot of thermal paper during their working day.”

CHEM Trust’s report “From BPA to BPZ: a toxic soup? How companies switch from a known hazardous chemical to one with similar properties, and how regulators could stop them”, highlights how industry is being allowed to replace the well-known hormone disrupting chemical bisphenol A (BPA), with very similar chemicals that may also be harmful.

New research from ECHA has found that the amount of bisphenol S (used by the industry as a replacement for BPA) used in producing thermal paper (e.g. till receipts) is increasing rapidly, with the volume doubling between 2016 and 2017.