A new report, published today by the European Environment Bureau (EEB), argues that unless the EU chemicals regulation REACH “is better enforced, it will never achieve its aim of removing harmful chemicals from the market“. EEB and CHEM Trust are particularly concerned about the way the ‘Authorisation’ system is working, which is supposed to result in the worst chemicals being replaced by safer alternatives. The report also reveals that the UK is not pulling its weight in identifying these chemicals.

The report also finds that there is a lot of variation in the performance of different governments, who have an important role in identifying problem chemicals and proposing controls on them.

This table from the EEB report shows how many chemicals each country has proposed as SVHCs: 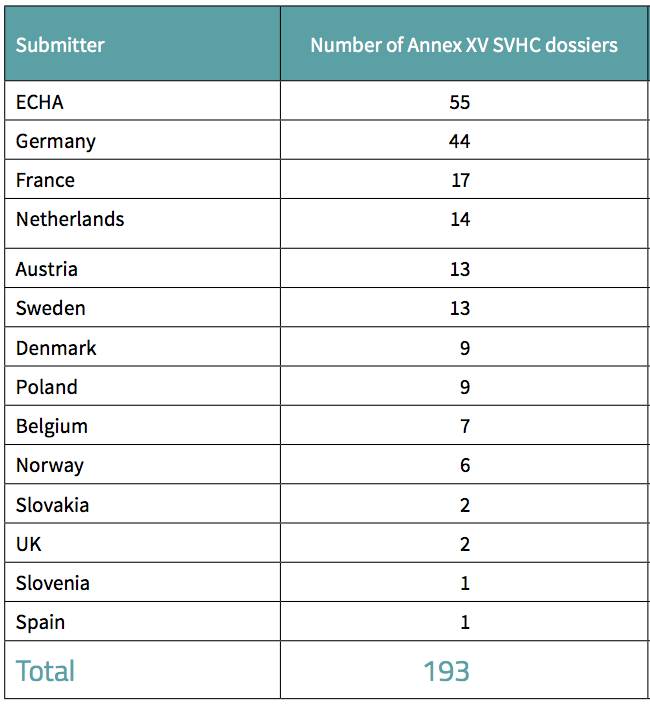 The UK government has only proposed two SVHCs. Even Norway, not an EU Member State, has proposed more (6), while France (17) and Germany (44) top the table.

One clue as to why the UK is so poor at identifying the worst chemicals is in a strategy document on the Health and Safety Executive web site. This states that for authorisation there must be “an overriding UK government policy need for the UK to take the initiative on a substance”. In CHEM Trust’s view this shows a worrying lack of commitment to human health and the environment.

“This report shows what is working and what isn’t with Europe’s system for controlling the most unpleasant chemicals. The European Commission, Member States and the European Chemical Agency should take note.
We are very concerned about the performance of the UK government, who seem to have a deliberate strategy of not identifying the chemicals of very high concern. Do we really think it is OK to leave this job to other countries, when UK citizens and wildlife are just as exposed to these hazardous substances?”