CHEM Trust has written to the UK Food Standards Agency (FSA) to urge action on harmful ‘Forever Chemicals’, PFAS. Our letter follows our recently published briefing on PFAS, a large family of over 4,000 perfluorinated chemicals to which people are being exposed via drinking water, food and consumer products. Our letter highlights important questions regarding the setting of safe levels for these chemicals.

Last year, the European Food Safety Authority (EFSA) published a revised opinion on tolerable intakes for two PFAS: perfluorooctanoic acid (PFOA) and perfluorooctane sulfonate (PFOS). A tolerable intake is an estimate of the amount of a chemical that is assumed to be without health risks when taken in daily (TDI) or weekly (TWI) over a lifetime. EFSA’s new tolerable intakes are 80 times lower for PFOS and 1750 times lower for PFOA than their former 2008 estimates. The committee of experts who performed the review concluded that “For both compounds, exposure of a considerable proportion of the population exceeds the proposed [Tolerable Weekly Intakes].”

The new values established by EFSA’s Panel on Contaminants in the Food Chain (CONTAM) in 2018 are based on a review of more than 200 human epidemiological studies, most of them from the last 10 years. However in the UK the FSA is still currently applying tolerable intake values estimated in 2009 by the UK Committee on Toxicity (COT) based on animal studies, not human data. Our letter challenges this outdated approach.

Concerns about infant exposure to unsafe levels of PFOS

Infants and children are particularly vulnerable to the risks arising from exposure to harmful chemicals. Notably, the early life stages are critical for the development of the brain as described in our report ‘No Brainer’.

In 2014, the UK COT performed a risk assessment on infant exposure to PFOS via their diet. It estimated the exposures of infants via breastmilk and infant formula and compared them to tolerable intakes recommended in EFSA’s 2008 and COT’s 2009 opinions. They estimated that there was little difference in exposure whether the infants where fed breastmilk or formula – though it’s always worth pointing out the medical advice is that breast is best, wherever possible.

At the time of the study, the committee concluded that the estimated exposures were well below the current TDIs, therefore, not suggesting a concern for infants’ health. However, the new EFSA opinion changes these TDIs – and is a reminder that when people talk about a chemical’s toxicity, they are actually talking about its ‘Currently Estimated Toxicity’, which can change as science advances.

The graph below shows what happens if you compare the minimum and maximum values estimated for the exposure of infants (in this case via breastmilk) to the EFSA TDIs from 2008 and 2018: 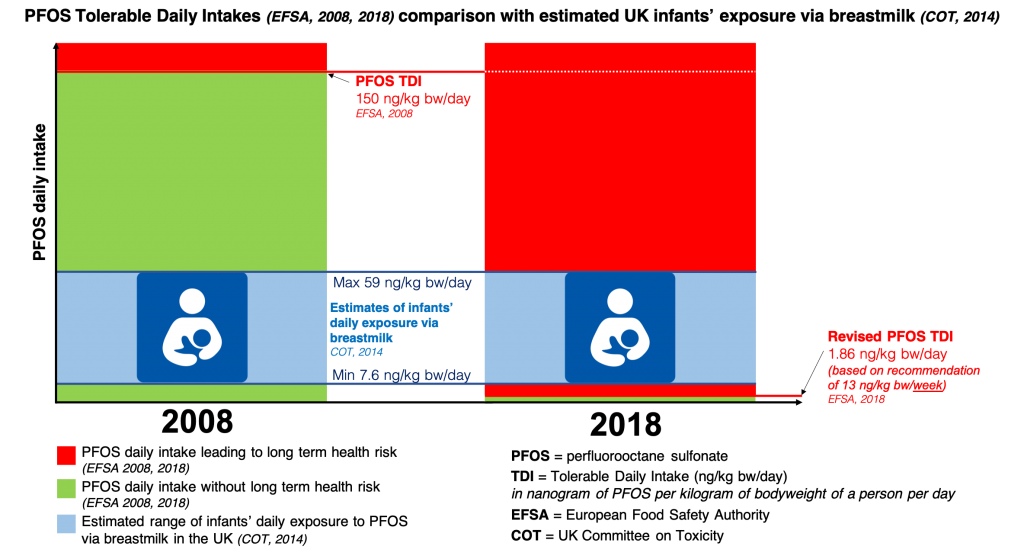 Note that formula fed infants are exposed to similar levels; Click here or on the image to enlarge it

Science is evolving, and so is our understanding of the adverse effects of certain chemicals on human health and our ecosystems. This is the reason why CHEM Trust argues that harmful chemicals like PFAS, which persist in the environment and pollute our bodies and those of wildlife should be replaced by safer alternatives, instead of relying on risk assessment approaches based on a current estimate of ‘safe levels’ of exposure.

The past is full of examples where previously assumed ‘safe levels’ had to be lowered (e.g. lead, BPA), meaning that necessary action has been delayed for years or even decades. During that time, unnecessary exposure to humans and wildlife continued – and in the case of persistent chemicals, pollution of the environment can continue for decades or centuries after production is banned.

What should be done now

The UK Parliament’s Environmental Audit Committee, in the context of its inquiry on Toxic Chemicals in Everyday Life, asked the FSA what steps it was taking to reduce exposure to PFOS and PFAS in food, and FSA replied that “no immediate actions have been proposed”.

PFOS and PFOA are being phased out globally under the Stockholm Convention, in 2009 for the former and 2019 for the latter. However, these chemicals are so persistent that they will continue to pollute the environment – and our bodies – for many years. The COT exposure estimates from 2014 were based on data from various EU countries from 2010 and older. More recent biomonitoring data in the EU are showing indication of decreasing trends of PFOS and PFOA following regulation and voluntary phase out. However, monitoring data at the EU level are revealing widespread occurrence of newer PFAS which are being developed as replacements to PFOA and PFOS – and which are also very persistent.

CHEM Trust is calling for all PFAS to be phased out and replaced by safer alternatives. For example, Denmark has recently announced it is going to ban on all PFAS in paper and cardboard food packaging. PFAS are used in some cardboard and paper food packaging as a grease and water barrier, but PFAS can migrate from the packaging to the food it contains. Such a ban is one way to reduce exposure via food consumption.

In the meantime, to lower your own and your children’s exposure to PFAS via food, avoid using non-stick cookware and favour home-cooked meals over fast-food and takeaways. In reality there isn’t much individuals can do to reduce their exposure to PFAS – we need action from Governments and companies.

“It is extremely concerning that formerly assumed safe levels of exposure to some PFAS chemicals are now deemed unsafe, especially for children. Some PFAS have been shown to impact the immune system of children, reducing their response to routine vaccination.

We want the FSA to urgently revise the current UK tolerable intake for PFAS chemicals and work with the UK Government to bring forward a ban on them in food packaging. The longer they take to act, the more our bodies, our children and the environment are polluted by these harmful chemicals.”