This week CHEM Trust’s Head of Science, Dr Ninja Reineke, is speaking on a panel at the Helsinki Chemical Forum on the subject of regulating groups of hazardous chemicals.

Below she explains why this approach is needed to better protect wildlife and humans from hazardous chemicals. 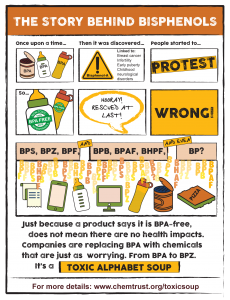 Business as usual is not an option

The history of chemical regulation is full of examples of ‘too little, too late‘.

The UN’s Global Chemical Outlook II report highlighted that the goal to minimise adverse impacts on human health and the environment from chemicals by 2020 will not be reached.

The very strong conclusion is: “business as usual is therefore not an option.” This calls for faster and more determined action and an acceleration of measures to control the impacts from harmful chemicals. Currently it can easily take over a decade from the first evidence of harm to restricting problematic uses.

The task is not small. In Europe alone, more than 22,000 chemicals produced and imported (over 1 tonne per year) are registered for use. REACH has put in place some new restrictions and ended the use of some substances of very high concern, but progress remains slow. One of the reasons for this is that today’s ‘business as usual’ means a substance-by-substance approach in risk management.

Despite significant progress made over the past 12 years, REACH still has not led to an effective way of identifying hazards and appropriately addressing them. A 2018 progress report  by the European Chemical Agency (ECHA)  found that 74% of dossiers submitted for registration had important safety information missing under the compliance check.

In 2018, a three-year investigation by German authorities found that only a third of substances produced above 1,000 tonnes per year met the legally mandated safety information. And even when concerns were demonstrated as a result of the more detailed substance evaluation process, no regulatory follow-up has been initiated for the majority of substances.

Once a chemical has been regulated, the easiest thing for companies to do is often just to substitute one banned chemical with another unregulated one with a similar structure: it is likely to have similar properties in the application and desired function.

The problem resembles the Grimms’ fairy tale of the hare and the hedgehog from Buxtehude, in which the hedgehog is always outrunning the hare. The riddle’s solution is that the very similarly looking hedgehog’s wife is already waiting, taking his place. In chemicals policy terms: there is always a very similar chemical available right there to fill the place of the banned chemical. This is an unequal race.

Unfortunately, the similarity in properties within substance groups often extends to environmental fate and toxicity – and this is what scientists are finding, for example, with the bisphenols.

The case of bisphenols

Last year, CHEM Trust published the report ‘From BPA to BPZ: a toxic soup?’, which examined how companies are being allowed to replace the well-known hormone disrupting chemical bisphenol A (BPA), with very similar chemicals that may also be harmful, for example bisphenol S (BPS).

This is despite the fact that ECHA’s risk assessment committee had found in 2015 that BPS “may have a toxicological profile similar to BPA” and advised against the substitution. In 2018, ECHA found that the amount of BPS used in producing thermal paper is increasing rapidly. This could clearly have been avoided.

BPS was selected for substance evaluation under REACH and ECHA sent a final decision with additional data request for BPS to the registrant(s) in 2016. We understand that most of the requested information has not been received by the deadline imposed in the final decision. It is now three years later and the Belgian REACH Competent Authority is still awaiting a large part of the requested data.

What regulating substances as groups means in practice

A more effective progress in risk management is warranted, therefore restricting groups of chemicals to become the rule rather than the exception.

Regulators should not delay action for substances of a chemical group which are likely to be similarly acting and used in the same situation as that of a regulated harmful chemical. Instead, the regulation should be extended to cover those and all other similar compounds.

Positive developments are on the way. Some EU countries as well as ECHA have started putting a larger emphasis on grouping to avoid regrettable substitution – for example in ECHA’s Strategy to promote substitution to safer chemicals through innovation.

A more extensive use of grouping has been backed by a detailed study produced for the European Commission as part of the development of a new strategy for a non-toxic environment, which is a commitment of the EU’s 7th Environmental Action programme.

The final study concludes that “the use of grouping strategies for assessing chemicals with structural similarities needs to be scaled up” to increase regulatory efficiency and effectiveness.

Among the proposed recommendations for relevant elements for a strategy for a non-toxic environment, the study mentions a “move from the current chemical-by-chemical to groupings of chemicals approaches in risk assessment and management”.

One important tool which is already accepted in company’s registration dossiers is the use of read-across (ie, the analogy concept) – why not use it more in the restriction process? CHEM Trust proposes that in the absence of sufficient data to the contrary, chemicals with a similar structure should be assumed to have the toxicological properties as harmful as those of the most toxic known substance in the group.

The main responsibility for the movement from one harmful chemical to another lies with the chemical industry and downstream users. If the regulators started taking a grouping approach to chemicals, this would send a very strong signal to the industry that replacing one chemical with similar chemicals should not be considered.

The lack of progress in protecting human health and the environment from the adverse impact on harmful chemicals globally is to a large part due to an approach to regulate chemical by chemical.

Adopting group restriction is a way to accelerate the risk management of chemicals and should be part of the solutions to tackle exposure to harmful substances. This is also of vital importance in the context of the circular economy to ensure clean supply chains and avoiding future legacies for a healthier planet. Otherwise the endless game of playing catch up and always lagging behind will just continue.

This article first appeared in Chemical Watch in April 2019.