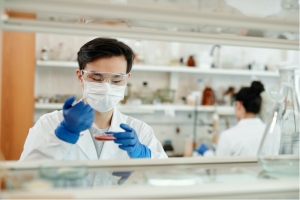 Photo by Edward Jenner from Pexels.

What is the precautionary principle?

How does the precautionary principle relate to EDCs?

It is often impossible to design and implement experiments that prove that EDCs cause the increase in diseases that we are seeing. For example, this could require exposing pregnant women to chemicals and following their children for several decades to monitor the effects. However, if there are indications from tests on cell lines as well as animal experiments that chemicals have endocrine disrupting properties, we need to act before waiting for absolute proof of harm in humans.

A meaningful precautionary approach requires transparency in all assessments and their underlying scenarios. These assessments should look widely at exposure routes, otherwise small-scale measures may be decided instead of more effective wide-ranging policy responses, which protect those most vulnerable. For example, the limited BPA ban in baby bottles from 2011 left pregnant women and the unborn child at risk from all other sources of exposure to BPA.

Why is the precautionary principle important?

Where regulatory action to protect or improve health has been taken in the past – even when there was not 100% scientific proof of harm – hindsight and further science has shown it to be justified. For details see the insightful report “Late lessons, early warnings-Volume 2” published by the European Environment Agency (EEA).

Precaution can play an important role in steering innovation in the direction of sustainable development. Innovation is truly sustainable only when the resulting benefits clearly outweigh the corresponding harms for the environment and society as a whole – not just for those that can sell the product (see ‘The innovation principle trap.‘)

The next question is “Are there any benefits from stricter controls for EDCs?“.