On 4th June CHEM Trust’s lawyers Leigh Day sent a legal letter to the UK Government, arguing that their proposed post-Brexit rules for chemicals and pesticides were not a proper reflection of the EU laws they were supposed to be copying. These laws would enter into force in the event of a no-deal Brexit. 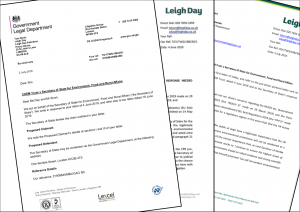 Since this letter, the Government re-drafted the pesticides rules, claiming that there had been a ‘drafting error’, which was surprising given that they deleted the most controversial part of the EU’s pesticides law, the ban on endocrine (hormone) disrupting chemicals.

We have, after some delay, now received a Government response to our concerns that the proposed chemicals laws, a UK statutory instrument (SI) part-copying the EU’s main chemicals law REACH, remove the right of stakeholders to participate into decision making. In particular, the Government makes a commitment to not undermine opportunities for public participation [our emphasis]:

In CHEM Trust’s view this commitment not to ‘undermine’ public participation and stakeholder engagement is important, but emphasises the importance of the ‘related administrative arrangements’ that they plan to put in place.

CHEM Trust has therefore decided not to proceed further with our legal action on the REACH SI at this time, but instead to focus on ensuring that any implementation of this SI is in line with the commitments made by the Government.

Our reply to the Government, sent by Leigh Day, makes it clear that we will be monitoring this process:

Your letter places clear emphasis on the central role that the HSE will play in the regulatory regime the Secretary of State has created through the REACH SI. Our client fully expects that the Secretary of State will consult on the terms of reference for the delegation of powers to the HSE, including in particular with regards to public participation, stakeholder engagement and transparency, and we should be grateful for your confirmation that he intends to do so.

CHEM Trust will continue to closely observe what measures are put in place to ensure that the Secretary of State makes good his promises that his Government “will not weaken environmental protections when we leave the EU”, and that the HSE is indeed able to “provide the necessary assurance checks”, as stated in your letter. CHEM Trust will not hesitate to take legal action if necessary to ensure that the Government fulfils its commitments on the protection of the environment and of human health if the UK leaves the EU.

The new Government letter also claims that our earlier letter was not the reason for the ‘correction’ to the pesticides statutory instrument:

“The omission of these paragraphs was previously brought to the Secretary of State’s attention by a stakeholder before your pre-action protocol letter was sent. Our client acknowledged that it did not intend for the material in paragraphs 3.6.5 and 3.8.2 to be omitted and, therefore, again before your pre-action protocol letter, committed to changing this by a further statutory instrument as soon as was practicable. To this end on 19 June 2019 the Pesticides (Amendment) (EU Exit) Regulations 2019 was laid before Parliament.”

Whilst it is quite possible that another stakeholder did mention this issue to the Secretary of State, it is also interesting that our letter was sent on 4th June and the change was made on the 19th of June. It’s also worth noting that this draft Statutory instrument was originally laid before Parliament on the 13th December 2018, six months earlier.

CHEM Trust firmly believes that the highest levels of protection for human health and the environment would be best secured by the UK remaining part of the EU’s REACH chemical regulatory system. Thus, we welcome the confirmation in the Government’s letter that the REACH SI represents a “contingency arrangement” and that the UK Government “intends to seek a future relationship with ECHA”.

In the event that the UK does not achieve this in negotiations, or enters a no-deal scenario, we will be watching the Government’s actions closely.

“CHEM Trust is disappointed that the UK Government has not agreed to put in a clear commitment to retaining stakeholder participation in the legal text of the REACH Statutory Instrument. However, we welcome their commitment not to undermine current opportunities for public participation and stakeholder engagement in the REACH process. In the event that this SI comes into force CHEM Trust will be closely monitoring the delivery of these commitments and we reserve the right to take legal action in the future.

We also welcome the Government’s continued intention to seek a future relationship with the EU chemicals agency ECHA; in CHEM Trust’s analysis the most effective way of ensuring a high level of protection of human health and the environment is for the UK to remain part of REACH.”