Following a legal letter from Leigh Day on behalf of CHEM Trust, the UK Government have announced today that they will re-instate a ban on pesticides with endocrine (hormone) disrupting properties in their no-deal Brexit laws.

The Government are claiming this is a drafting error, yet this European ban on endocrine disrupting pesticides has been a major focus of lobbying from pesticide companies and the US government for many years, so it is surprising that such an error could be made accidentally and not be spotted by those who work in the sector.

For example, an internal European Commission note of a meeting of the World Trade Organisation in July 2015 describes an “aggressive and well orchestrated attack” on EU policies on endocrine disrupters from the US Government, supported by 16 other governments including India and China. 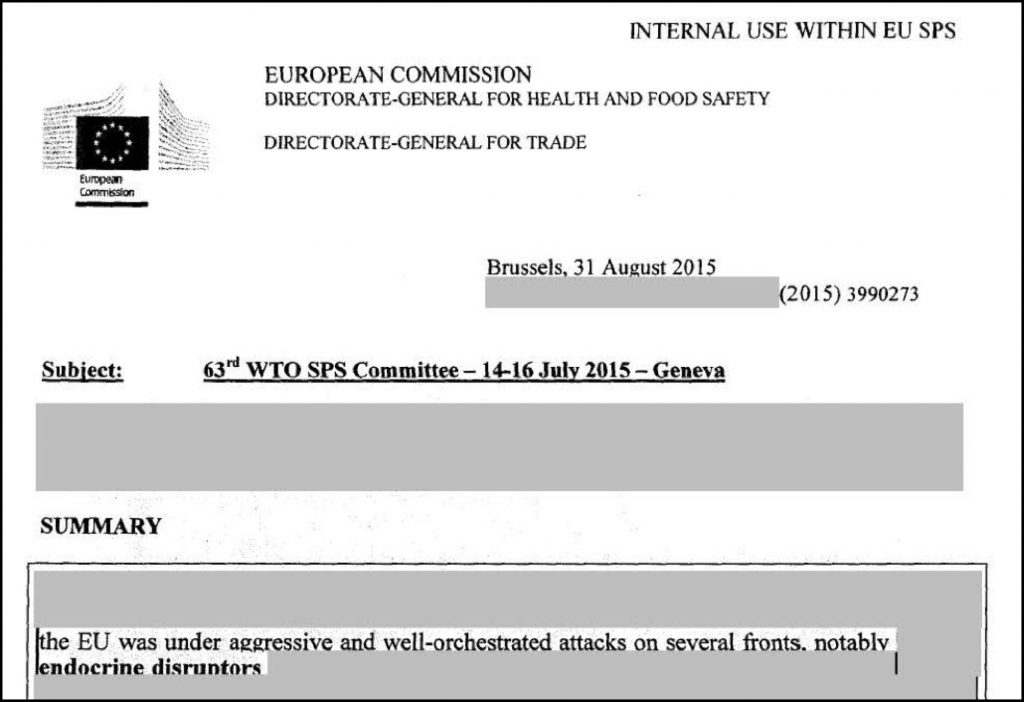 The two paragraphs the UK Government initially deleted contained a ban on endocrine disrupting chemicals that have impacts on human health or on ‘non target organisms’ such as insects or fish: (our emphasis)

An active substance, safener or synergist shall only be approved if, on the basis of the assessment of Community or internationally agreed test guidelines or other available data and information, including a review of the scientific literature, reviewed by the Authority, it is not considered to have endocrine disrupting properties that may cause adverse effect in humans, unless the exposure of humans to that active substance, safener or synergist in a plant protection product, under realistic proposed conditions of use, is negligible….

An active substance, safener or synergist shall only be approved if, on the basis of the assessment of Community or internationally agreed test guidelines, it is not considered to have endocrine disrupting properties that may cause adverse effects on non-target organisms unless the exposure of non-target organisms to that active substance in a plant protection product under realistic proposed conditions of use is negligible.

Due to the intensive industry lobbying mention above the EU is only just starting to implement these two paragraphs, with the fungicide epoxiconazole being one of the first pesticides proposed for a ban.

The Government has now published a revised statutory instrument that reverses the deletion of these paragraphs.

“A spokesperson indicated DEFRA is “promptly addressing” what they described as a “drafting error” in the relevant statutory instrument, ENDS Report says.

The spokesperson added: “The UK’s high level of environmental protection will be maintained outside the EU whether we leave with or without a deal – including maintaining controls on endocrine disrupting chemicals.”

“It is very welcome that the UK has re-introduced this ban on endocrine disrupting pesticides in their no-deal regulations.

However we are finding it quite hard to believe that the initial deletion of these paragraphs was a drafting error, giving the substantial industry – and US Government – lobbying against this ban over many years.

How is it possible to accidentally delete the two most controversial paragraphs in a 50 page law, and how come no-one who works in this sector reported the error to the Government?

CHEM Trust is still waiting for a response from the Government on the other issue raised in our legal letter, the removal of stakeholder participation in the chemical regulatory system.