CHEM Trust have written to the European Food Safety Authority (EFSA) to ask them why they misrepresented the results of their risk assessment of the commonly used hormone disrupting chemical bisphenol A (BPA). The risk assessment, published in January, concluded that there was a ‘low health concern’ from exposure to bisphenol A – yet the EFSA press release said there was ‘no health risk’, which does not mean the same thing. CHEM Trust has already written to the EU Health Commissioner on this matter, but his department referred us back to EFSA.

** Update: Since we sent the letter on 31st March, we have found that EFSA made corrections to the abstract of the BPA risk assessment on 25th March 2015 – see this blog post for details. **

** Update 2: We received a reply to this letter on Friday 17th April – for details see this blog.**

CHEM Trust also has other concerns regarding the Risk Assessment published in January, in particular regarding which scientific research was included or excluded by the risk assessment panel. However, this letter focusses on the more straightforward issue of EFSA’s ability to communicate accurately about the conclusions of its own expert group.

As we state in the letter:

In the ‘Overall Conclusions’ of the Executive Summary of the CEF panel’s report of its findings on Bisphenol A, it states that: (our emphasis)

central estimates for aggregated exposure to BPA via the dietary and non-dietary sources …, is also below the t-TDI of 4 ?g/kg bw per day, indicating that the health concern for BPA is low at the estimated levels of exposure. However, the CEF Panel noted that there is a considerable uncertainty in the exposure estimate for the non- dietary sources.

The emphasis on ‘central estimates’ is important, as in another part of the paper it is stated:

To summarise, the panel has found that exposure could exceed the t-TDI, as there are lots of uncertainties in exposure estimates. They have then described health concern as ‘low’.

The press release image below (image made on 30th March 2015) very clearly claims ‘no health risk’ – we have highlighted this in red.

In the letter to EFSA’s Executive Director Dr Bernhard Url we ask him:

We received a reply to this letter on Friday 17th April – for details see this blog.

For the latest information on bisphenol A in our blog, click here.

This story has been covered by Chemical Watch and Food Packaging Forum. 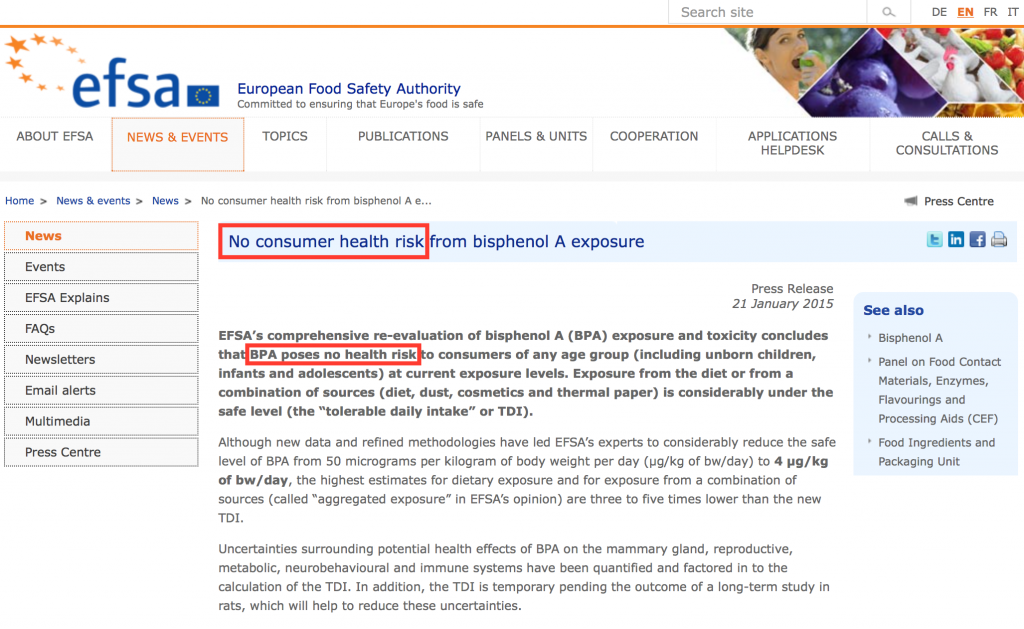