A report published today by CHEM Trust highlights how chemicals in food and consumer products used in homes, schools and offices could harm brain development in children. 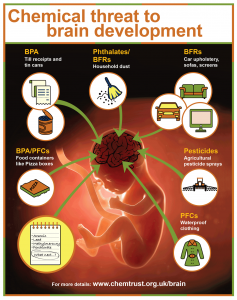 The impacts – which may include ADHD and lower IQ – are avoidable and can prevent children reaching their full potential says CHEM Trust, in No Brainer: The impact of chemicals on children’s brain development: a cause for concern and a need for action.

Researchers have shown that many thousands of people have been exposed to now largely-banned chemicals such as lead and PCBs at high enough levels to have harmed their brain function. Now there is growing concern about the impacts of exposures to many of the ‘new’ chemicals in our 21st century lifestyles.

Chemicals of concern include brominated flame retardants (BFRs), a group of chemicals added to furniture, electronics and building materials, per- and poly- fluorocarbons (PFCs), used for non-stick coatings or breathable coatings in everyday products including packaging and clothes. Some chemicals in these groups are being phased out, but similar chemicals remain in everyday use.

The study also points out the unpleasant reality that children are constantly exposed to a cocktail of chemicals, which can act together, something which is still largely ignored by chemical safety laws.

CHEM Trust proposes a range of policies that could help address this challenge, for example faster regulatory action on groups of similar chemicals, and development of new methods for identifying chemicals of concern. They also include advice for consumers on how to reduce their exposure.

“The brain development of future generations is at stake. We need EU regulators to phase out groups of chemicals of concern, rather than slowly restricting one chemical at a time. We cannot continue to gamble with our children’s health.”

The report has been peer reviewed by two eminent scientists in the field, Professor Philippe Grandjean and Professor Barbara Demeneix.

“Chemical exposure is now at unprecedented levels, is multiple, ubiquitous, and present from conception onwards”

“The current generation has the responsibility to safeguard the brains of the future”
“I would insist that the Precautionary Principle must be applied in order to protect the next generation’s brains.”

Dr Warhurst added, with reference to the UK’s Brexit discussions:

“This report finds that the EU is making progress in regulating problem chemicals, but it needs to move faster. However, we strongly recommend that the UK Government works to stay within the EU’s main chemicals regulation REACH in its negotiations with the EU, as we don’t think that a parallel UK regulatory system could achieve an equivalent level of protection of public health and the environment.”

Dr Warhurst has recently given oral evidence on Brexit & chemicals to the UK House of Common’s Environmental Audit Committee inquiry on “The Future of Chemicals Regulation after the EU Referendum”.